I Had to Write about it: A Story about Exile 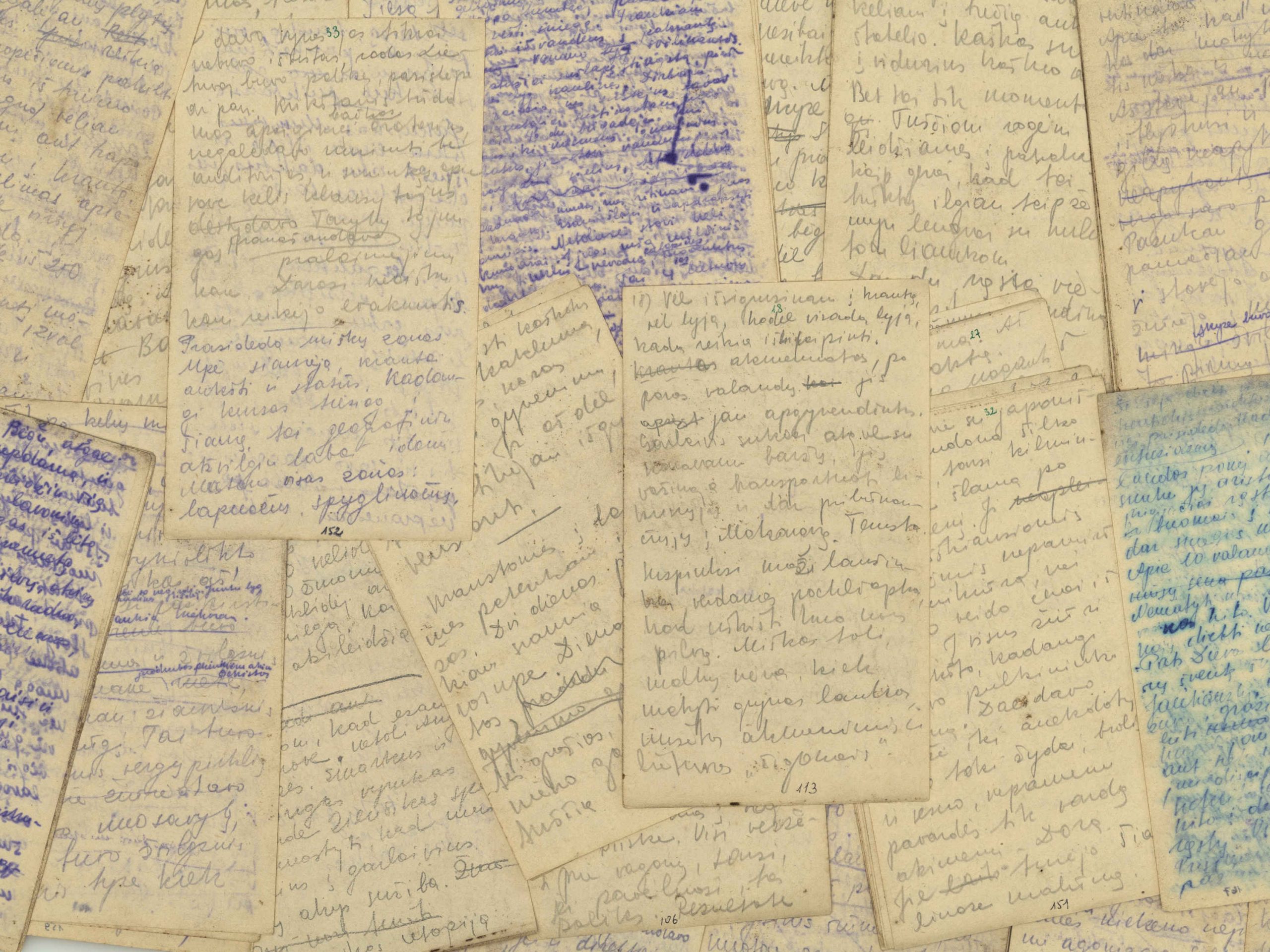 This exhibition features an original text written by Dalia Grinkevičiūtė in 1949–1950 about her life in Siberian exile and is the first time that this manuscript is being displayed in Lithuania. Grinkevičiūtė’s memoir recounts the authentic experiences of a fourteen-year-old girl and her life on Trofimovsk Island in the Lena River delta in northern Yakutia, to which she was exiled after the start of mass deportations from Lithuania in June 1941.

Dalia Grinkevičiūtė’s text is a story about exile experienced by thousands of people. Indeed, some 300,000 Lithuanian residents were exiled from their homes and imprisoned during the years of Soviet occupation.

Despite freezing cold, exhausting hunger, and physical misery, Grinkevičiūtė never lost hope. In 1949, she and her mother fled their place of exile and returned to Kaunas, Lithuania. While in hiding and sensing the threat of arrest, Grinkevičiūtė wrote down what she remembered, burying her notes in a jar in her parents’ garden. She was soon arrested and imprisoned. After serving time in a labour camp and enduring a second period of exile, Grinkevičiūtė returned home in 1956, but was unable to find her original manuscript.

Sensing an obligation to testify about the horrors of the Soviet system, Grinkevičiūtė began writing her memoir anew in 1974. Excerpts from this text written in Russian and signed under her actual surname were published in the Paris-based Russian dissident journal Pamiat’ in 1979. Her memoir was eventually published in full in Lithuania in 1988 in the journal Pergalė, under the title Lietuviai prie Laptevų jūros (Lithuanians by the Laptev Sea).

The buried manuscript was accidently found in the spring of 1991, in the same place where it had been hidden. It consisted of memories recorded in pencil and different coloured ink on individual sheets of paper. Grinkevičiūtė’s memories are shocking in their unadorned realism, conveying images of starving, freezing, and dying deportees, forced to work until exhaustion, and are astounding in their display of the resolute drive to resist, survive, and never surrender.

This exhibition, like the life captured in Grinkevičiūtė’s manuscript, is physically difficult. It refrains from using customary stands, bright lighting, or detailed written explanations. Instead, visitors will enter onto a soft flooring, like the layer of snow covering a Lena River delta island, into which have been placed dim sources of light which, when touched, will play the voice of actor Birutė Mar reading selected excerpts from Grinkevičiūtė’s memoir.

Stands placed on the floor display items that bear witness to a journey into the unknown, to the miserable daily life of exile, exhausting physical labour, and the hope for a better future kindled by sitting down on a makeshift schoolroom bench after a day of hard work.

This exhibition commemorates the 80th anniversary of the first mass deportations from Lithuania.