History of the castle and unique 360° panorama

Gediminas Castle Tower is free of charge for the following visitors: pre-school children; residents of children’s care homes and socially deprived children; teachers accompanying groups of schoolchildren; persons with a severe disability and accompanying persons; persons aged 80 years or over; members of the Lithuanian Guide Union; tour guides accompanying tourist groups; museum employees, members of the International Council of Museums (ICOM) (upon the submission of an appropriate document); employees of the Cultural Heritage Department at the Ministry of Culture and its territorial branches, with a civil servant’s or employee’s identification card; journalists; tourists with the Vilnius City Card; all visitors on the last Sunday of each month.

Information for disabled visitors: exhibition halls of the Gediminas Castle Tower do not have wheelchair access.

1 hour filming with professional equipment on the Gediminas scenic overlook – 20,00 EUR. Exposition filming is permitted only with the consent of the administration.

Funicular is free of charge for: pre-school children; children in foster care; persons with disabilities.

The ticket office closes 30 minutes before closing time. If the funicular is used only to go down the hill, a ticket should be acquired at the ticket office immediately following the descent. Parental supervision required for children under twelve years of age. 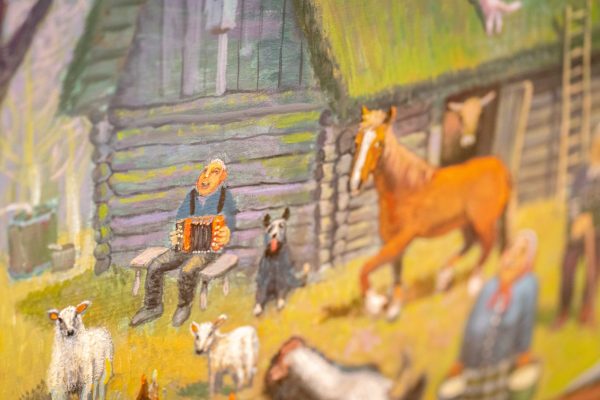 Gediminas Castle Tower is the most frequently visited branch of the National Museum of Lithuania. Its exhibition invites visitors to learn about the history of Vilnius as the centre of the Grand Duchy of Lithuania, and also to take in the most spectacular panoramic view of the city.

Canon balls from 14th and 15th century attacks by the Crusaders; from the same period – one of several wooden cross-bow arrows found in Lithuania, as well as a ritual axe made of horn and adorned with ancient Baltic swastika symbols; letters written by Gediminas in 1322–1323 to Pope John XXII and European merchants; an interactive installation dedicated to the Baltic Way allowing visitors to experience being part of the event.

As the visitor climbs up the narrow steps of the tower they will discover several levels of exhibits presenting the development of the Vilnius Castle territory, as well as exhibits of Baltic jewellery and important military artefacts.

The second floor contains the interactive exhibition “Visual timeline: a look through the Windows of Gediminas Tower”, which invites visitors to experience an attack by Crusaders; they can also see what Renaissance Vilnius looked like and compare this image with a panorama of the Upper and Lower castles from 1785, a time when these buildings had already lost their political importance. This journey is an opportunity to experience the changes the city has gone through from the 14th to the 21st centuries – by both looking through the tower windows, then at the tower itself.

On the third floor visitors can experience what it meant to stand in the Baltic Way – one of the most memorable of the big anti-Soviet demonstrations, when, in August 1989, close to 2 millions people linked hands from Vilnius to Tallinn.

From the Tower’s observation square a panorama of Vilnius opens up and it seems as though one can hold the city in one’s hand. And the fluttering national flag reminds us that Gediminas Tower is a symbol not only of Vilnius, but of Lithuania as a whole.

Perched on the south-western edge of the Castle Hill, Gediminas Castle Tower is the only remaining tower of the three that once protected Vilnius Upper Castle, and is the only well preserved example of Gothic defence architecture in Lithuania. In its form the structure is similar to a castle donjon, or keep – the most important and most impenetrable type of defence building.

Built in the 14th and early 15th centuries, the tower was originally a four-story structure designed for defence against firing weapons. It was also inhabited.

After standing unused for a long period, the structure’s walls began to crack, and by the 19th century the fourth floor had collapsed. Under Imperial Russia’s occupation of Lithuania the Upper Castle was turned into a military citadel: in 1832–1834 the tower’s two upper floors were dismantled, and a hexagonal wooden structure for sending optical telegrams was erected on top of the remaining two stories. With this addition the tower became the highest building in Vilnius. The Russian Imperial flag fluttered from its roof and salvos were fired daily from canons positioned on the hill. More than once the building was repaired and its foundations reinforced, and in 1895 it came to house a fire watch tower.

The flag of the Republic of Lithuania was raised on Gediminas Castle Tower for the first time on January 1, 1919.

Historical research into and protection of the tower began after 1920; the building’s interior was cleared out and its wooden addition was finally removed. With the start of the Second World War, plans for opening a museum in the tower were disrupted. Bombing of the city led to further damage, but after the war ended the tower was quickly repaired. The museum that exists here today opened its doors for the first time in 1960, and since then it is one of the most visited heritage sites in Lithuania. Following an initiative of Sąjūdis, the Lithuanian movement for independence from the Soviet Union, on 23 August 1989 Gediminas Castle Tower served as the start of a human chain that connected Lithuania, Latvia, and Estonia in the Baltic Way – a protest against the signing of the Molotov–Ribbentrop Pact, the German–Soviet treaty signed on that day in 1939 and which led to the occupation of the three states by the Soviet Union.

The Gediminas Tower Exhibition reflects all of the main historical periods on the history of Upper Vilnius Castle, from the Grand Duchy of Lithuania’s resistance to the Crusaders to the battle to establish the modern Lithuania state’s independence.

Gediminas Hill is free to visit during the day.

In order to get to the top of the hill visitors can take a path from the side of the Vilnia River on Trispalvė alley (not suitable for bicycles, wheelchairs or prams) of use the funicular (from the inner courtyard of the Old Arsenal, Arsenalo g. 3).

The gate of the fence surrounding the Gediminas hill fort is closed from 23.00 to 7.00.

In order to get to the top of the hill visitors can take a path from the side of the Vilnia River on Trispalvė alley of use the funicular.