Expositions are free of charge for the following visitors: museum employees; members of the International Council of Museums (ICOM); members of artist associations, the Lithuanian Association of Art Historians, the International Association of Art Critics, the Lithuanian Association of Archaeologists, the Lithuanian Guide Union, the Lithuanian Journalist Union, and the Lithuanian art photographers Union; students of Vilnius Art School for Children and Youth; friends and benefactors of the museum (upon the submission of an appropriate document); cadets and conscripts from General Jonas Zemaitis Military Academy of Lithuania; soldiers of the Lithuanian Grand Duke Gediminas Headquarters Battalion; soldiers in mandatory military service; army volunteers; pre-school children; residents of children care homes and socially supported children; the handicapped (0-25% work capacity) and their accompanying persons; persons from 80 years of age; teachers accompanying groups of schoolchildren; journalists; employees of the Cultural Heritage Department at the Ministry of Culture and its territorial branches, with a civil servant’s or employee’s identification card; tourists with the Vilnius City Card; citizens of Ukraine; all visitors on the last Sunday of each month.

Information for disabled visitors: only the ground floor of the New Arsenal has wheelchair access.

Guided tours are available in Lithuanian, English and Russian languages. Guided tours must be ordered in advance by phone or e-mail (8 5 262 9426, edukacija@lnm.lt). 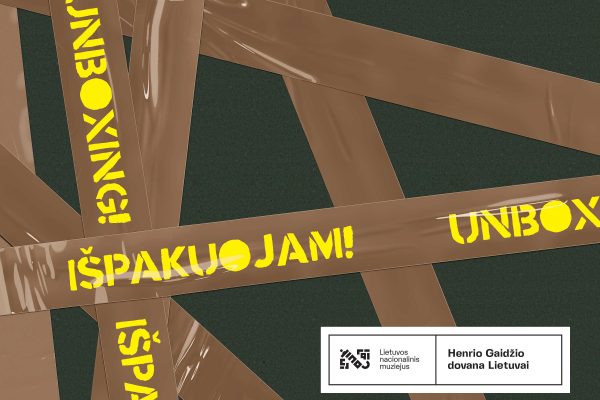 Located in the New Arsenal, the National Museum of Lithuania’s main exhibition invites visitors to learn about both the history of the Lithuanian state and Lithuanian ethnic culture.

What will you see here? A church bell from the time of Vytautas the Great (1420); an executioner’s sword from the 16th–17th centuries; an 18th century hook used to drag plague victims; artifacts related to the French and Russian emperors; a trowel used by Emperor Alexander II to install a symbolic brick in the Paneriai railway tunnel; an imprint of Russian Emperor Peter I’s hand; a watch made by Jokūbas Gierkis, who during the 17th century was the most famous watchmaker in the Grand Duchy of Lithuania; a treasure of 14th century coins found in Vilnius Lower Castle; and an encrusted 17th century gun karabela (a type of Polish sabre).

The beginning of the exhibition transports the visitor to the Vilnius Antiquities Museum (1855–1915), on the basis of which the National Museum of Lithuania was later established. The Antiquities Museum’s artifacts and original glass display cases present the only such example of a “museum within a museum” and recreate the spirit and atmosphere of that earlier institution.

The next room offers a thorough presentation of Lithuania’s history – from the formation of the state in the 13th century to its fall in 1795, and how the societies of those eras lived.

The second floor introduces visitors to the turbulent years of the 19th and 20th centuries. This was a period of rebellion and the struggle for freedom, a time during which the nation took shape and modernized, all of it leading up to the proclamation of Lithuania’s independence on 16 February 1918.

In other second-floor exhibition rooms visitors can see Lithuanian ethnic culture artifacts dating from the 18th century to the first half of the 20th century and related to the traditions and everyday life of Lithuanian peasant, folk art, ethnic costumes, residential interiors, and Lithuanian iron crosses, which have been recognized by UNESCO as intangible cultural heritage.

The National Museum of Lithuania sits at the confluence of the Neris and Vilnia rivers, the site where the Vilnius castle compound was established centuries ago. This ensemble included not only the Lower and Upper Castles, but also the Old and New Arsenal buildings. During the 16th century, the New Arsenal was the private residence of Sigismund Augustus, Grand Duke of Lithuania and King of Poland. It was referred to as the New Riverside Hall because, at the time, a tributary of the Vilnia flowed past the building’s facade.

The Grand Duke’s residence was built by Benedykt Sandomierzanin, from Kraków, while the finishings and interior were completed by specially hired furniture makers, carpenters, tile stove craftsmen and stonemasons. The facade of the new palace faced the gardens, which contained three ponds and extended as far as today’s Tilto Street. Legend has it that Sigismund Augustus built this lavish residence with its gardens, ponds and swans to gain the favour of his future wife, Barbara Radziwiłł, with whose death the palace lost its exclusive status.

The period to the end of the 18th century marks another stage in the building’s evolution. After Lithuania was absorbed by Imperial Russia and the Russian army established itself in the Lower Castle, the New Arsenal was used to store the military district’s artillery. During this period the building was refashioned according to the strict classicism preferred in Imperial Russia. A six-column portico was added and the windows were reset. The facade acquired the more dull expression typical of buildings allocated to the Imperial Russia’s military needs. While at first canons were stored here, the building was later adapted as a barracks. With the 1863 Uprising it also came to serve as a prison for political prisoners.

The New Arsenal building continued to be used for military purposes up to and following the Second World War. The National Museum of Lithuania was established in the New Arsenal building in the 1960s and opened to the public in 1968. Today the museum offers expositions dedicated to the history of the Grand Duchy of Lithuania, the tumultuous transitional period of the 19th century, and Lithuanian ethnography.