A 12,000–year journey through prehistoric Lithuania

Expositions are free of charge for the following visitors: museum employees; members of the International Council of Museums (ICOM); members of artist associations, the Lithuanian Association of Art Historians, the International Association of Art Critics, the Lithuanian Association of Archaeologists, the Lithuanian Guide Union, the Lithuanian Journalist Union, and the Lithuanian art photographers Union; students of Vilnius Art School for Children and Youth; friends and benefactors of the museum (upon the submission of an appropriate document); cadets and conscripts from General Jonas Zemaitis Military Academy of Lithuania; soldiers of the Lithuanian Grand Duke Gediminas Headquarters Battalion; soldiers in mandatory military service; army volunteers; pre-school children; residents of children care homes and socially supported children; the handicapped (0-25% work capacity) and their accompanying persons; persons from 80 years of age; teachers accompanying groups of schoolchildren; journalists; employees of the Cultural Heritage Department at the Ministry of Culture and its territorial branches, with a civil servant’s or employee’s identification card; tourists with the Vilnius City Card; citizens of Ukraine; all visitors on the last Sunday of each month.

Information for disabled visitors: exhibition halls of the Old Arsenal have wheelchair access.

Guided tours are available in Lithuanian, English and Russian languages. Guided tours must be ordered in advance by phone or e-mail (8 5 262 9426, edukacija@lnm.lt). 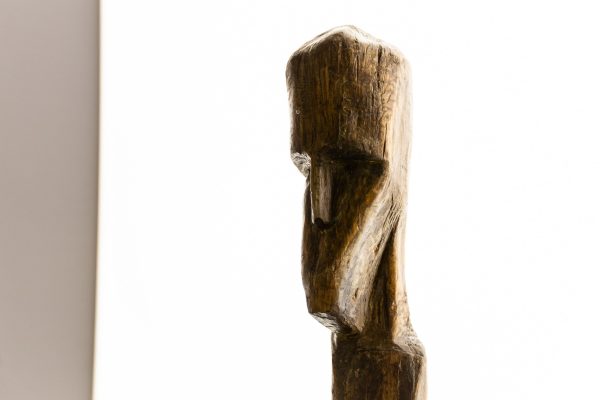 Can I talk to them?

The archaeological exposition “Lithuania’s Prehistory” is a 12,000-year journey beginning with the oldest event – when, following the melting of the ice field, the first humans appeared – until the Iron Age, when the Baltic tribes formed in Lithuania and became the basis on which the state was later established.

A pagan priest who was buried almost 8,000 years ago and the woman who accompanied him to the afterlife; a unique 5,000 year old ritual staff topped with the head of a female elk; a collection of Stone Age amber objects; the very earliest example of narrative art found on Lithuanian territory – a pot with the image of a human figure with outstretched hands; masterpieces of Baltic jewellery; weapons of warriors and the 13th–14th century Stakliškės treasure chest filled with three kilograms of silver.

On the first floor, the visitor is introduced to the oldest pieces in the exhibition – local Stone Age tools and weapons. These archaeological finds related to hunting, household work, fishing, early agriculture, art, and religious beliefs reveal the worldviews of the people who lived in prehistoric Lithuania. The now expanded exhibition, which presents replicas of the seven most important Stone Age finds, offers visitors a unique opportunity to have contact with the kinds of objects created by early peoples.

On the second floor, the exposition “Lithuania Before State Formation” covers a period of more than 1,000 years following the birth of Jesus Christ. The evolution of human daily activities and lifestyles from the 1st to the 13th centuries is presented through different themes: barter and trading, agriculture, metallurgy, weaponry, the knight and his steed, spinning and weaving, and ceramics. The Lithuanian nation’s ethnic history is presented through that of separate Baltic tribes, through archaeological finds and shifts in burial customs of the Lithuanians, the Yotvingians–Sudovians, the Highlanders, the Selians, the Semigallians, the Samogitians and the Curonians.

At the northern base of Gediminas Hill, at the confluence of the Neris and Vilnia rivers, stands the Old Arsenal, another branch of the National Museum of Lithuania.

From the 13th to the 16th centuries, the area of the current Old Arsenal complex contained both wooden and later brick defence walls and towers. Archaeological research has revealed that a craftsmen’s settlement existed between the Old Arsenal and the shore of the Neris River.

Defence walls protected the base of Gediminas Hill from the effects of flooding. Grand Duke of Lithuania Sigismund Augustus began building the Arsenal in 1547. At the time most of the existing stone walls were torn down or their materials were reused in the foundations of new structures.

The first element of the Old Arsenal to be erected was the main and largest structure of the compound; its back pushes against the slope of the hill, where a stone defence tower once stood.

Construction of the Arsenal was related to the extensive activities of the Vilnius canon foundry right there along the shore of the Vilnia. Cannon building and gun casting were among the most important roles within the Lithuanian army of the era. The Arsenal was headed by a special official called a cekwart. We can get a sense of the size of the Vilnius Castle Arsenal at that time from a Venetian envoy’s 1560 report stating that Sigismund Augustus kept 180 heavy cannons and many smaller ones, most of them beautifully decorated, in the city. According to a 1565 inventory of the Vilnius Arsenal, during the times of Vytautas the Great the Vilnius Arsenal continued to hold the cannons used by the Grand Duchy of Lithuania’s ruler.

With time, the Old Arsenal complex grew and came to also include the North and West wings.

Throughout the 18th century, these buildings saw many reconstructions: first the main, eastern, Old Arsenal was lowered and became a storage building; the north wing later became a barracks, and Vilnius commandants settled in the west wing. Under Imperial Russia’s occupation, that building also housed an interrogation commission and prison.

The Old Arsenal continued to serve military purposes until the end of the 1960s.

In 1960–1987 the compound was converted to a cultural space: the eastern wing was restored according to 18th century Lithuanian artist Pranciškus Smuglevičius’s original drawings and was handed over to the National Gallery of Art of Lithuania, while the National Museum of Lithuania took over the western and eastern wings. The latter is where today’s visitors can find the largest and most valuable collection of Lithuanian archaeological artefacts.