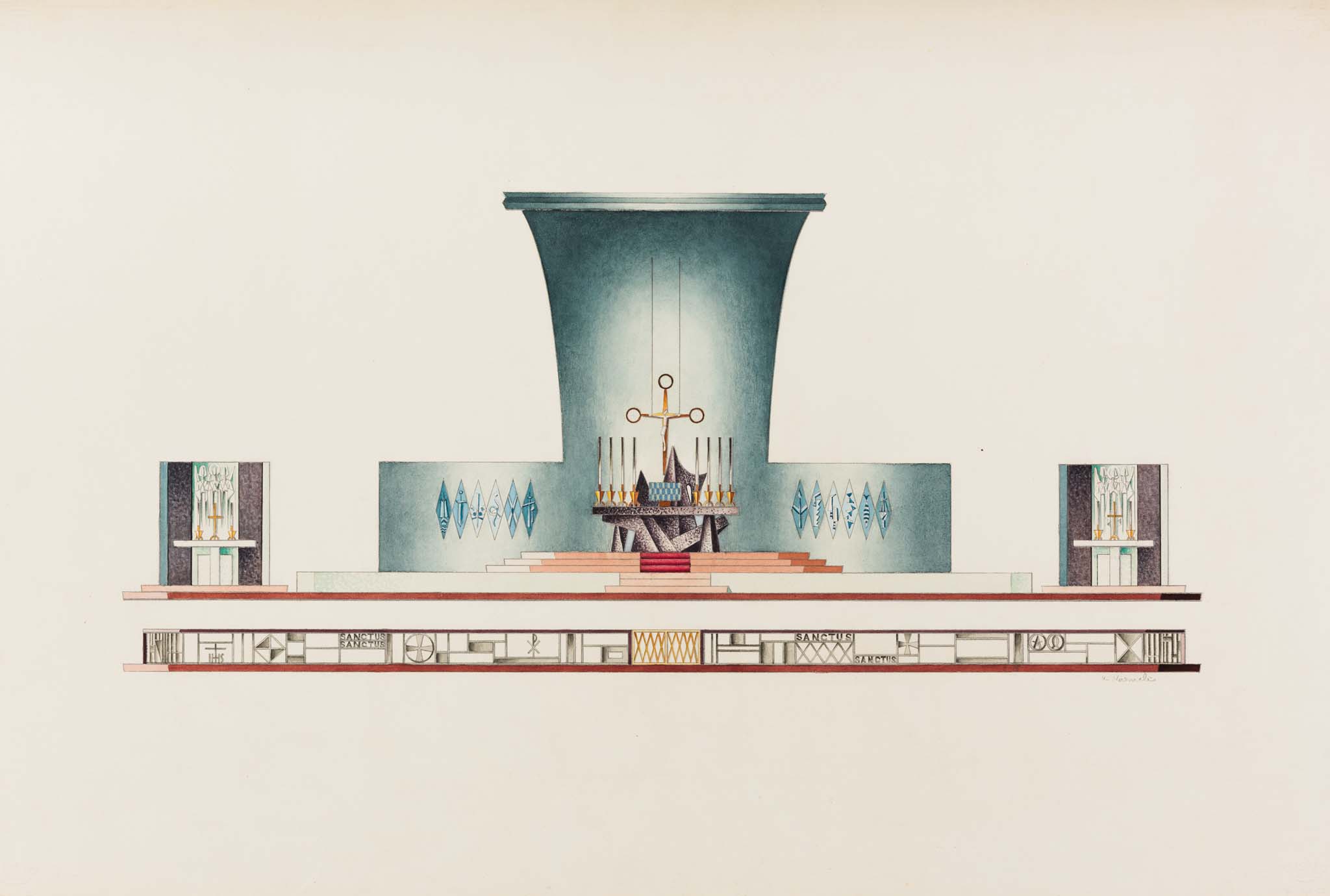 To commemorate the tenth death anniversary of one of the most prominent op art creators of the 20th century, a collector, Kazys Varnelis, a rich exhibition of his ecclesiastical art drawings has been presented to the public for the first time. From his early days, Varnelis was actively and extensively engaged in drawing. It can be said that charcoal and pencil accompanied him throughout his life. Often this form of artistic expression – not requiring any special working conditions or substantial expenses – became central for him, and Varnelis later regarded such drawings as independent works of art.

In the late 1940s, Varnelis became engrossed in the decoration of churches built at an ever increasing pace by a large Lithuanian community in the USA. Over a decade, the painter produced stained glass windows, mural paintings, sculptures and liturgical paraphernalia (monstrances, candlesticks) for various Catholic churches, striving for modern expression, resisting the banal taste of clients and, at the same time, seeking to cultivate it. His stained glass windows and altar paintings are moderately stylised and decorative, whereas the modest use of national patterns and symbols as well as the combination of natural materials reveal the painter’s refined aesthetics and professionalism.

The painter usually captured his primary ideas in graphite pencil on tracing paper. Some of his designs of the kind are sketch projects and drawings for specific objects, while the others constitute exhaustive compositions on sacral themes. The artworks produced in this creative period already show the signs of the painter’s pursuit of infinity – when a visual work of art is perceived as a boundless plane that can be extended optically – that later crystallised in his optical abstractions.

Varnelis left his finished works of art dedicated to various shrines in the States. Unfortunately, some of them have lost their initial look (due to church reconstructions or adaptations to changed requirements), the others have disappeared irretrievably. On his return to Lithuania in 1998, the artist brought his commissioned sketches, drawings and designs with him; thus, the lasting legacy of the exhibits stored in the museum lies in their documentary quality that reveals not only a specific phase in the painter’s creative life but also a much wider cultural phenomenon – the movement of construction of Lithuanian churches and parishes in postwar United States of America.