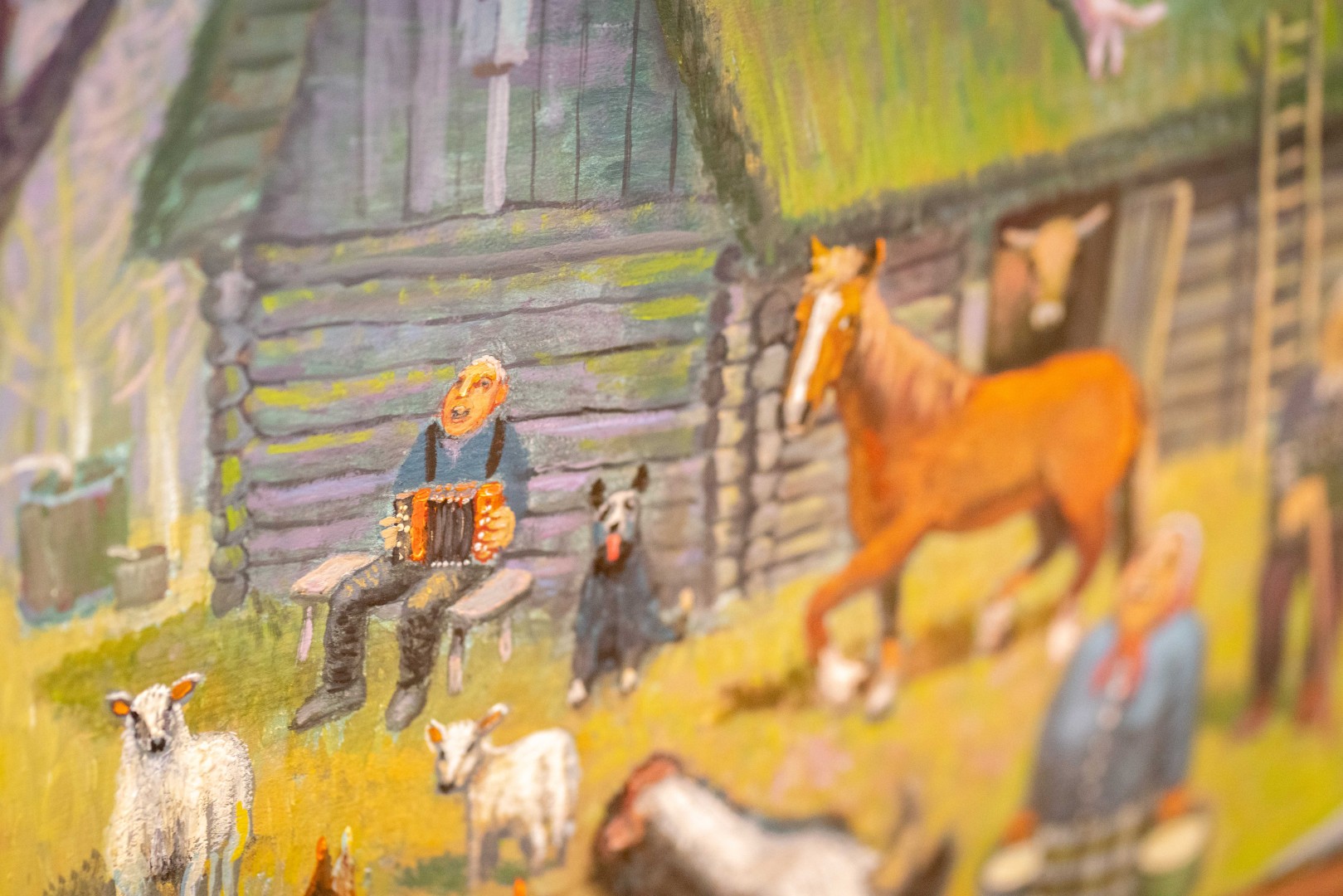 The year 2020 is an extraordinary period in the lives of Lithuanian folk masters as we are celebrating the Year of Folk Art marked with various exhibitions and multiple other events presenting Lithuanian folk art. One of such events is the 5th Republican Competitive Exhibition of Primitive Painting to Win the Monika Bičiūnienė Prize. This year, the exhibition is extraordinary and is dedicated to mark the 110th birth anniversary of this eminent artist.

Monika Bičiūnienė (1910-2009) entered the world of Lithuanian folk art at a respectable age, and yet managed to leave a distinct imprint there through her inner life and joy as well as abundant authentic creative legacy. It is hard to believe someone else could see so many apples and cherries in bloom, such greenness of grass and trees, so many flowers, birds, light, and sun. The artist never showed misery or despair in her works. The world she depicted is fabulously beautiful, colourful, and lively.

In 2010, the Vilnius Community of the Lithuanian Folk Artists’ Union together with the Vilnius Region Folk-artists Creators Community organised the first exhibition of primitive painting to mark the 100th birth anniversary of Monika Bičiūnienė. The aim of the event was to commemorate the well-known Lithuanian primitivist painter, to preserve the traditions of primitive painting, to introduce new and to pay tribute to the best representatives of this art.

Subsequent competitive exhibitions have been arranged in cooperation with the National Museum of Lithuania that has published the exhibition catalogues Primitive Painting – a valuable gift for exhibition participants, visitors and everyone interested in the means of expression, tendencies, and continuation of primitive painting.

The paintings radiating light and high spirits create a pleasant atmosphere – the depicted animals, birds, colourful houses and flowers, women, men, and grannies bring a smile to our faces… Visitors are drawn to the traditions, customs, forgotten household chores, famous buildings or locations revealed from the individual perspective of an author.

The jury led by the art critic Dr. Nijolė Tumėnienė selected 128 artworks by 58 artists. The first Monika Bičiūnienė prize has been awarded to Raimondas Šalaševičius, the second prize has been granted to Elena Petrauskienė, and third prize has been presented to Danguolė Raudonikienė.

The prizes have been established by the Vilnius Region Folk-artists Creators Community.

The Lithuanian Council for Culture is the sponsor of the event. The special award established by the painter Rimas Zigmas Bičiūnas has been given to Dalia Žalimienė, and the second award has been granted to Elvyra Butkienė. Nominal prizes and presents have been established by separate individuals and organisations.

The 2020 fifth competitive exhibition will be displayed in an exceptional venue of the city of Vilnius – the Gediminas Castle Tower, which is a big surprise and great honour to the
exhibition participants. The exhibition will be open to the public until the end of March 31th, after which all the artworks will be transported to Monika Bičiūnienė’s native town of Rokiškis. The laureate award celebration will take place at the Rokiškis Regional Museum.